DELUSIONAL by Gravitas Venture is now streaming on AΜΑΖΟΝ PRIME AND MANY OTHER STREAMING PLATFORMS!  CONGRATULATIONS to the dynamic filmmaking duo extraordinaire ANAIS ALMONTE AND JOSEPH ARIOLA  — and the talented cast and crew which includes LEON PINKNEYE AND OLGIERD MINKIEWICZ! I play Dr. Margaret Collins and she is on the case!

THANK YOU to ALL our WONDERFUL AUDIENCES at HEISENBERG at TheaterLab and to my brilliant acting partner Albert Insinnia!!! What an AMAZING RIDE with SOLD OUT houses!!! Looking forward to MORE PERFORMANCES SOON!!! #dowhatyoulove #

IT’S OFFICIAL!!⁣⁣⁣  We’ll be performing Heisenberg by Simon Stephens at Theaterlab from June 7 – June 23, 2022!  Ticket info to follow!  Below, feeling jazzed after a run-through with my brilliant collaborators Albert Insinnia and Brenda Currin.

We won the panel selection for Best Dark Comedy AND AUDIENCE CHOICE AWARD for the NYWIFT Shorts Film Festival!  Thanks to everyone who voted!  Can’t wait to shoot some more!  🎥

⁣⁣
⁣⁣
⁣⁣⁣
Thank you all those who supported our @seedandspark campaign!⁣⁣
⁣⁣
Thank you to our genius creator/showrunner @alexandrafoucard and our genius actors, @ireneglezos @dinadrewduva @zillahglory and @elenazazanis! ⁣⁣
⁣⁣
The creative team, @anikbenkov, director, @annettalm, DP, @laelakilbourn, composer, @yah__yah__el__⁣⁣
⁣⁣
The production @eclectionmedia, @purplesteel to name a couple, our team and crew! AND all the lovely people and businesses in Park Slope that opened their homes and businesses to us!!! ⁣⁣⁣
⁣

In good company with Albert Insinnia and Austin Pendleton!

Rehearsals continue for HEISENBERG by Simon Stephens with Albert Insinnia and our director, Austin Pendleton.

CAN YOU SEE OUR EXCITEMENT to be back in front of a LIVE AUDIENCE at the John Drew Theatre at Guild Hall in East Hampton in A PERFECT GANESH by the late great Terrence McNally.  Directed by Amanda Kate Joshi.  Presented by Josh Gladstone.  Fantastic direction and cast.  With Shalin Agarwal, Will Porter and Lue McWilliams.

What a great night!  Attended the opening of a psychothriller feature I was in called DELUSIONAL shot just before the pandemic hit.  Congratulations to the amazing cast and crew on its completion and especially Anais Almonte and Joe Ariola and 2Guns Productions!  With Anais Almonte, Leon Pinkney and Olgierd Minciewicz.

So much fun last night inaugurating the summer season at the John Drew outdoor stage in East Hampton with “So It Goes,” a compilation of love letters recently discovered between Kurt Vonnegut and his first wife!  So happy to be performing LIVE again!

Last year, I was part of an acclaimed run of Eric Fallen’s American Fables at Here Arts Center directed by Clark Morgan.  On October 9, we will be doing it on Zoom.  Presented byThe Dramatists Guild of America, directed by Clark Morgan, and featuring these amazing actors, click the Eventbrite link below to register and join us!

I am so excited to be doing a LIVE staged reading of Simon Stephens’ HEISENBERG with Albert Insinnia that’s being directed by Austin Pendleton as a benefit for Guild Hall in East Hampton on Sunday, August 23 at 8 pm! It will be outside and socially distanced for sure but WOW! Working on this play with Albert and Austin remotely helped me get through quarantine. So excited to be able to share it alive and aloud thanks to Kate Mueth and Josh Gladstone. Tickets available at: https://www.guildhall.org/…/play-in-the-backyard-heisenber…/

Hope everybody is staying well and strong during these challenging times.  So grateful to be keeping the creative spirit alive with readings and rehearsals online.  This past weekend, I so enjoyed playing Mrs. Webb in the spirited virtual reading of Our Town by Thornton Wilder that was live-streamed by Voice Theatre and directed by Shauna Kanter.

Excited to be kicking off the year with a staged reading this coming Monday, 1/27 of a beautiful new play by Joey Merlo called Arancini as part of Abingdon Theater Company’s Around the Table Series.   Stellar cast!   Directed by Taylor Haven Holt.  Seating limited.  Click link below for more info and tix!

Next up, a workshop of Brume by Sylvia Pieto on October 29th at 4 pm.  A fascinating new drama directed by Maureen Payne-Hahner.   To RSVP, email mhahner.win@gmail.com.

What a great week of performances!  A truly stunning ensemble.  Pictured here with Kerry Malloy in the one act Perfect Weather by Eric Fallen.  Directed by Clark Morgan.  We are running through next weekend.  Use  code FRIENDS for discount.

Very excited to be taking part in American Fables, a series of short one acts by Eric Fallen, directed by the wonderful Clark Morgan. Fascinating stories and a stunning ensemble of actors! Opens Thursday.

Just back from amazing week in Woodstock workshopping Legacy, written and directed by Shauna Kanter, about a group of Jewish artists in Berlin in 1939. More to come in NYC!

July, 2019  Screened our short film Air at The Studio iPhone Film Festival at the SVA Theatre.  Had so much fun working with these dynamic and multi-talented filmmakers!

Wrapped shooting on Sunday for film short Miles Brando Is A Crybaby directed by Russell Katz and produced by Andrew Galanter! Wonderful cast and crew with Martin Herlihy and Anthony Oberbey.

October 2018 During curtain call of our closing matinee of The Rose Tattoo, some surprise flowers were delivered! Images by Lisa LLC (@birdddog1 on Insta) was photographing the show and caught the moment. Directed by Dana Greenfield. Pictured here with Vance Barton and Laurence Cantor. What a great time! 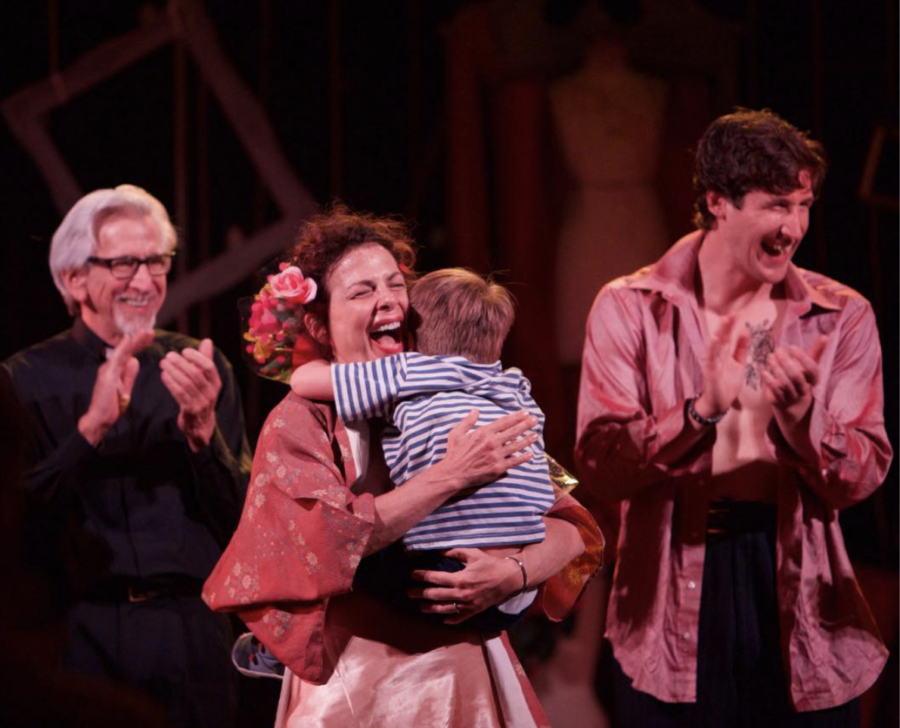 September 2018 Playing Serafina in The Rose Tattoo with Vance Barton as Mangiacavallo for the Provincetown Tennessee Williams Theater Festival in September directed by Dana Greenfield! For tix: http://twptown.org/the-rose-tattoo-2018

April 2018 Back in NYC in pre-production for Park Slope Moms, a comedy series about moms in Park Slope, playing Nina Stansfield with Alexandra Foucard, Monica Wyche and Zillah Glory. Directed by Annetta Marion.

July 2017 Tennessee Williams wrote: “Make voyages. Attempt them. There’s nothing else!” What an amazing voyage it was in Playhouse Creatures’ production of Tennessee Williams’ The Two Character Play directed by Austin Pendleton at the Duo Multicultural Center with Joseph W. Rodriguez playing Felice. Huffington Post Review by Jed Ryan.

June 2017
Had such fun working with Monica Wyche, Jonathan Strait and Kristie Larson on a short film called Sister Comma Frances. So impressed with director Rebecca Fay O’Neill and the whole team!

April 2017
Nominated Best Actress by the Big Easy Entertainment Awards for her portrayal of Lady in Tennessee Williams’ Orpheus Descending at Southern Rep in New Orleans directed by Jef Hall-Flavin.

July 2016
Just wrapped shooting on a SAG indie film called Vessel co-written and co-directed by Jack Dilday and Johan Aidt. With Jack Dilday and David Newer. Had the best time shooting in the Catskills! Can’t wait to see the rough cut. A phenomenal filmmaking team!

May 2016
I reprised the role of Lady in Tennessee Williams’ Orpheus Descending in New York City at the Theatre at St. Johns Lutheran Church, 81 Christopher Street, pictured here with director Austin Pendleton.

Fellow Greek Olympia Dukakis played Lady in another production of Orpheus Descending that Austin directed 40 years ago in Williamstown. How lovely to see her in the front row closing night.